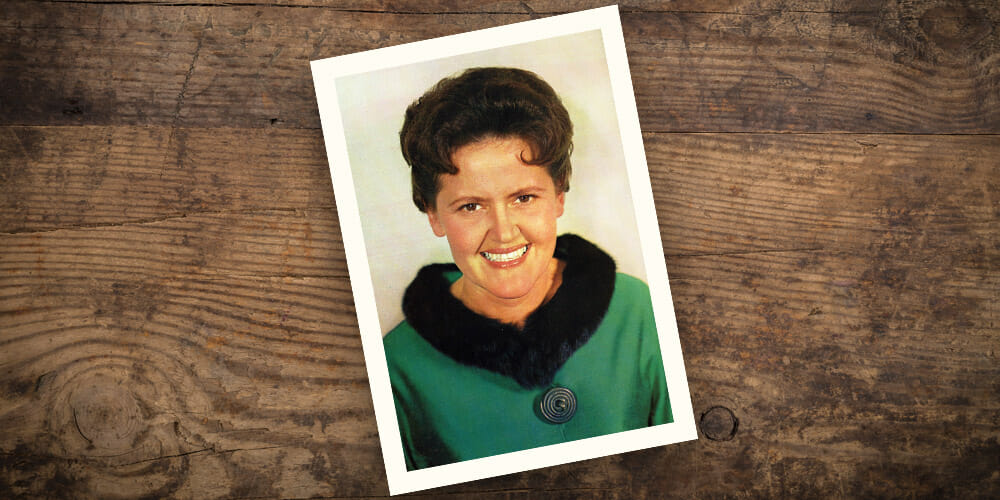 Delker was “singing for a living” since she was three years old.

Beloved Voice of Prophecy singer Del Delker passed peacefully to her rest on January 31, 2018, in Porterville, California, at the age of 93. For six decades, whether over the airwaves, in a church or at an evangelistic meeting, her strong contralto voice unabashedly shared Christ’s love with rapt audiences around the world. Her more than 40 Christ-centered adult and children’s albums are still enjoyed worldwide, and it is estimated she sang in 15 different languages during thousands of performances.

Voice of Prophecy Speaker/Director Shawn Boonstra said of Delker, “Del had the ability to preach a sermon through a song. Her face was radiant with the love of Christ, and over and over, I heard people say that listening to her was a taste of heaven!”

Adventist world church president Ted Wilson echoed this sentiment, “When we get to heaven, we will meet many people who were not only blessed by Del’s voice but were influenced by her Christ-centered singing to make a decision to follow Jesus.”

A Celebration of Life service will take place at the Loma Linda University Church in Loma Linda, California, United States on Saturday, March 24, from 3-5 p.m. The event will feature music and memories, and all are invited to attend. Learn more at vop.com/deldelker.

Del Delker (born Ardella V. Delker) came into this world on October 21, 1924 in the small Midwestern town of Java, South Dakota. At an early age, Del’s father left the family, leaving her mother, Martha, to care for Del and her brother, Stanley. In 1931, as the Great Depression deepened, her mother, with $59 in her purse, decided to move to California along with her two sisters and brother-in-law. Their money ran out in Yakima, Washington, where they got jobs in a fruit cannery until they could earn enough money to continue their trip to California. They eventually settled in Oakland, where Martha worked as a caterer.

Delker demonstrated a talent for music early on. In the book about her life, Del Delker, she told the story of how she went missing one day at the age of three. Her mother became frantic and enlisted many of the neighbors to help find her. Suddenly, the phone rang and the manager of a local bank asked if she was missing something. In tears, her mother said she couldn’t find her daughter, to which the manager replied, “Well, she’s down here, standing in front of the bank, singing for a living, and people are putting money in her hot little fists!’”

“I wanted to be a dance band singer,” says Delker. “My brother worked in a dance band for a while, but. . . . he didn’t want me to live that life, because he knew what often went on behind the scenes.”

Delker attended an Adventist school during grades 5-8, then after graduating from high school, got a job at a bus station. A friend told her about a place he’d discovered in Oakland called the Quiet Hour, and she started attending services there. Although her mother was a baptized Seventh-day Adventist, Delker was not yet a member, but she was impressed by the genuine friendliness of J. L. Tucker and his staff.

She recalls one evening when Tucker preached about heaven. He concluded by saying, “I want to be there, don’t you? I want to see Jesus. I want to live with Him for all eternity, don’t you?” Delker recalled that it seemed that he looked directly at her as he asked those questions.

Delker looked back on that sermon about heaven as the time when she gave her heart to the Lord. In another few months, she made her decision to be baptized and join the church.

She began using her musical talents to sing on the Quiet Hour broadcasts. Within a few weeks of being baptized, she was asked to sing at a camp meeting held in Lodi, about 70 miles east of Oakland. An audience of several thousand heard her sing what would become her signature song, “The Love of God.”

The fear of singing live before a large crowd was replaced by a feeling that bordered on pride when people greeted her afterward and told her how her performance had touched their lives. “Then it was almost like the Holy Spirit spoke right to me. It wasn’t that I heard a voice or anything, but I could just sense God speaking to me, reminding me that Jesus and my ego couldn’t sit on the throne together,” she said.

One evening in 1947, she found herself in one of the many vineyards that surrounded the campground. As she walked down the rows of grapevines, she fell to her knees and prayed, “Lord, if my voice is going to keep me out of heaven, take it away from me.” In response, she felt a strong impression, as if God was telling her, “I’ll take care of your ego. You leave that to Me.”

Back in Oakland, Delker continued to sing for the Quiet Hour broadcasts while she worked days for the Pacific Greyhound bus company and saved money to attend college in the fall.

Then one day, the phone rang and someone from the Voice of Prophecy asked her if she was interested in joining the VOP staff. She said no, but a few days later, she received another call from them. Again, she replied that her plans didn’t include moving to Los Angeles. A third call from VOP resulted in a similar response. But a fourth call led her to wonder whether God was leading her on a different path than she had planned for herself.

After praying and seeking the counsel of friends, she decided to walk through the door God had opened for her. Tucker, her spiritual mentor and counselor, put his seal of approval on her decision by loading up his own car with her few belongings and driving her to Southern California.

A New Voice at the Voice of Prophecy

One of her first jobs was working with H.M.J. Richards, the father of the Voice of Prophecy’s founder, H.M.S. Richards, Sr. Over the next several years, she worked in several clerical positions at VOP, while occasionally singing on the broadcasts and going out on weekend appointments with the VOP team. Although she felt frustration that she wasn’t singing as much as she would have liked, the ministry’s associate speaker, Elmer Walde, encouraged her to stay the course.

Finally, about three years after joining the staff of VOP, Wayne Hooper, a composer, arranger and King’s Heralds member, told her, “I’ve been watching you. I really believe that the Lord called you here and that He has a place for you in the music ministry of the Voice of Prophecy. I want you to know that you can count on me. If there’s anything I can do to help you further your career as a singer, I’ll do it.”

Delker performed many of Hooper’s arrangements for the next 50 years. In fact, Delker’s last public performance was at Hooper’s memorial service after he lost his battle with cancer in 2007.

Delker had a passion for the work of the Voice of Prophecy, and for the decades that followed, her voice (along with the King’s Heralds) became inextricably linked with the ministry and its mission.

She had the pleasure of working with three Voice of Prophecy speakers, including the founder, H. M. S. Richards, Sr.—whom she (and others) called the “Chief.” She said that Richards “was beloved all over the world because of his courage in beginning a radio ministry, his powerful preaching, and his warm, personable way of meeting with people.”

The list of musicians who performed with Delker reads like a who’s who of Adventist performers. They included the King’s Heralds, Brad Braley, Gordon and Phyllis Henderson, Calvin Taylor, Phil Draper, Jim Teel, Janice Wright and the Wedgwood Trio.

In 1982, when the music department of the Voice of Prophecy was disbanded, Delker was asked to stay on, though she was in need of an accompanist. Little did she know that God had set in motion a chain of events that would solve that problem in a delightfully providential way.

Hugh Martin was a composer and songwriter whose music and lyrics have been performed in Broadway musicals and Hollywood films. He composed the tune for “Have Yourself a Merry Little Christmas,” which appeared in the motion picture Meet Me in St. Louis.

In 1960, at the height of his career, he found himself in a small hospital chapel in England after suffering a nervous breakdown. He promised God that if he recovered, he would use his talents to honor Him. A few years later, back in the United States, Martin happened across a Voice of Prophecy broadcast. He later wrote to Delker: “I listened [to the Voice of Prophecy] for nine years. . . . your voice captivated me, and I remember thinking, ‘If only I could be her accompanist.’”

In 1979, Martin was in the hospital for some tests, and he found himself sharing a room with a Seventh-day Adventist pastor, William Lester. As their conversations followed more spiritual topics, Martin and Lester began studying the Bible together and Martin was baptized.

Martin moved to Thousand Oaks, California, to be close to the Voice of Prophecy in case his services were needed. In 1982, Delker approached him about being her accompanist. Over the next four summers, they performed together in several places around the country. Martin went on to write updated lyrics for his Christmas standard, and Delker recorded the new version: “Have Yourself a Blessed Little Christmas.”

After spending most of her life in Southern California, Delker moved to California’s Central Valley and enjoyed a fairly active retirement. Her goal in life was to spread the good news about Jesus, and she will continue to do so through her music. She passed away peacefully with that hope in mind.

Her close friend (and pianist/organist during many of her later concerts) Phil Draper said on the day of her passing, “I spoke to her last week and found her bright, witty and jovial—but tired. She was ready to rest in the arms of Jesus. She commented how she’d sung and talked about the soon coming of Jesus and was amazed it hadn’t happened. Next awakening, she will see Him face-to-face. I promised her we’d travel through the Universe singing His praises. Rest dear friend, Del. I will see you in the morning.”

No doubt she would appreciate the sentiment. As she said in 2009, “The highlights of a career like mine are watching people come to Christ because He used you,” she says. “I can’t convert anyone; but the gospel does!”

On March 24 from 3-5 p.m., the Voice of Prophecy will present a Celebration of Life service for Del Delker at the Loma Linda University Church in Loma Linda, California, United States. A live stream of the event will be available, with a reception to follow. In lieu of flowers, the family encourages that donations be made to the Voice of Prophecy’s Del Delker Memorial Fund. Details may be found at vop.com/delfund.

A big thanks to Stephen Chavez for the content from his 2009 Adventist Review article “I Know He Watches Me.” Additional thanks to Phil Draper, Ken Wade, and Delker’s nephew and niece, Dean and Irene Delker. 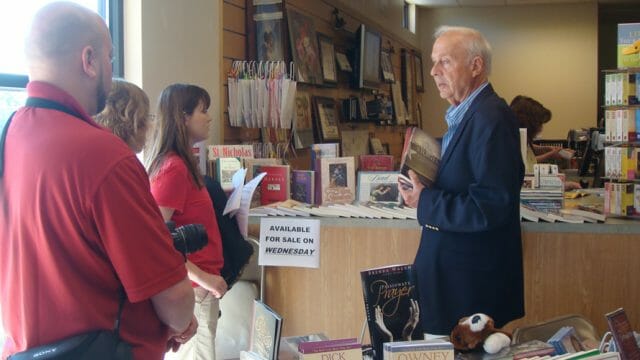 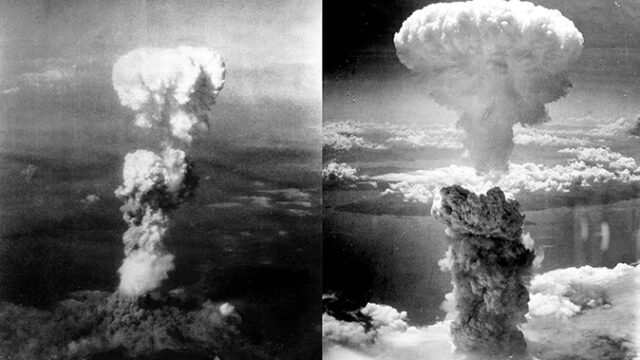 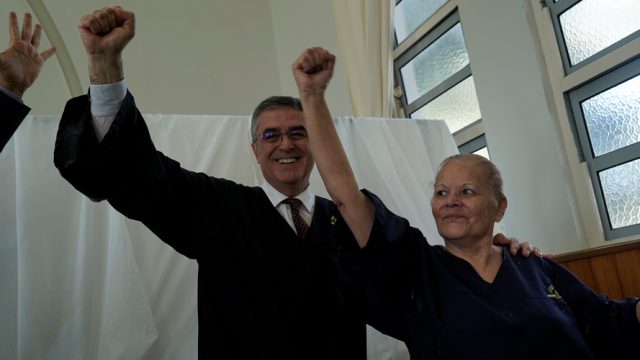 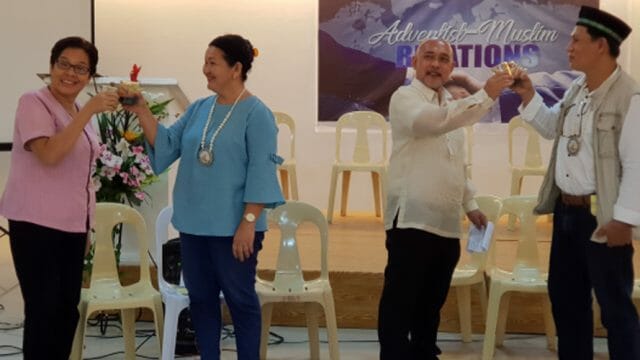 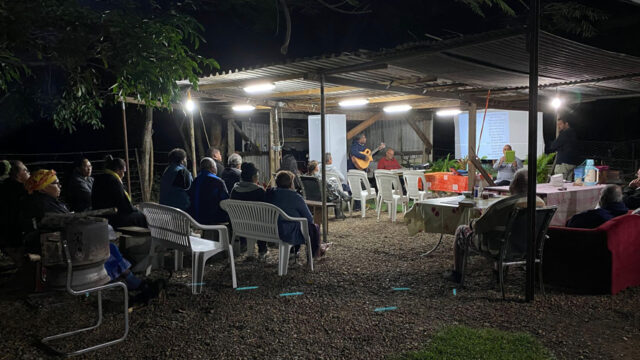 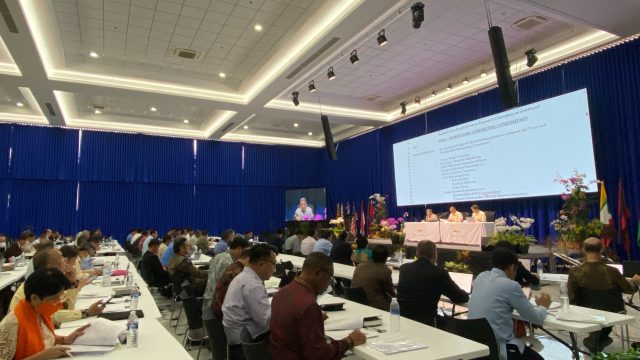