Dariusz Ginda says he loves soccer but God even more.

Editor’s note: News editor Andrew McChesney is currently traveling in Eastern Europe with Trans-European Division communication director Victor Hulbert and reporting on Adventist work in the region. For a list of others stories, follow the links at the end of this story.

People have called Dariusz Ginda foolish and worse for turning down a nearly $500,000-a-year soccer contract in Poland.

Ginda, a lifelong Seventh-day Adventist, said he does not enter into controversy over his decision to keep the Sabbath rather than play in the premier league.

Instead, he says: “I know you don’t understand, but this is what I believe. Money was never the issue. It was always God who was more important. Please try to understand that.”

Ginda’s decision to place God first may have cost him the chance to become an international soccer star. But he is a hero to many people in soccer-loving Poland, a predominantly Roman Catholic country with 38.5 million people and only 5,800 Adventists. He receives letters nearly every day from people who express gratitude for his example of faithfulness.

You could call Ginda an accidental soccer evangelist.

“You shouldn’t look at the things that this world tells you to look at,” Ginda, 46, said in an interview in Poland’s capital, Warsaw, this week. “You will only have those things for a few seconds and then they will go away. You must focus on God and having a good relationship with Him. That lasts forever.”

Ginda, known to friends and sports fans as Darek, is not only a soccer player but also a Christian musician and the Sabbath School superintendent at the Adventist church near his hometown of Chojnów in southwest Poland. The father of two daughters aged 15 and 23, he works full-time as a company driver and coaches and plays for a fifth-league soccer team, Skora Jadwisin, three days a week.

But he is known across Poland for refusing to play on Sabbath since becoming a professional soccer player in 1989 at the age of 19.

“He is a very dedicated Adventist,” said Jaroslaw Dziegielewski, president of the Adventist Church in Poland. “He could have had a really great career in soccer.”

He was echoed by Ryszard Jankowski, president of the Adventist Church’s West Polish Conference, whose territory includes Ginda’s hometown.

“Darek is a very nice person, and he has a lovely Christian family,” he said.

Ginda, raised by an Adventist mother, remembers being an obedient child. While classmates may have gotten into trouble, he could be found at home doing his homework and in church on Sabbaths. He also spent hours on the soccer field. 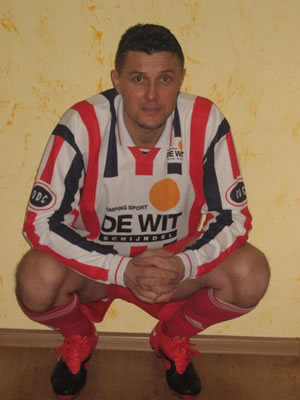 “I could have looked for another career, but I quickly realized that soccer was my passion,” said Ginda, a soft-spoken man with a kind face.

Ginda’s first contract, with Chojnowianka, a fourth-league team, stipulated that he would not be required to play during the Sabbath hours from sunset Friday through sunset Saturday. Remarkably, the team made the exception for the young striker just a month before Poland’s Communist government collapsed in parliamentary elections in June 1989.

“I was baptized when I was 16, and I knew that I would never break the Sabbath law,” Ginda said. “At the time I kept the Sabbath because I wanted to be obedient. As my faith matured over the years, my reason for keeping the Sabbath became because I love God.”

But it wasn’t until two years later that Ginda started to think about soccer evangelism. It happened in October 1991 when he agreed to play a match on Saturday for the first time.

The Chojnowianka team, in line with its contract with Ginda, usually played on Sundays and rescheduled Saturday matches to another day. But rival teams soon saw that Ginda was a formidable opponent on the field and that his team refused to play on Sabbath because of him. Pressure grew to hold matches on Sabbath, Ginda said.

Finally, the day came that a crucial match fell on a Saturday and the team could not make other arrangements. The best it could do was schedule the first half of the game during the Sabbath hours and the second half after sunset. Ginda agreed to show up at the stadium after sunset.

Chojnowianka played well during the first 45 minutes, scoring a goal. Then halftime arrived. The players sought to stretch the break beyond the customary 15 minutes as they waited for Ginda to arrive. They tied their shoes, checked their shorts, and carefully tied their shoes again, Ginda said. They kept glancing at their watches, waiting for sunset at 5:10 p.m.

Then the Sabbath ended, and Ginda bounded onto the field.

Shortly into the second half, Ginda passed the ball to a teammate for an easy goal. The score stood at 2-0.

A few minutes later, that same teammate passed the ball back to Ginda.

“I scored the most beautiful goal of my entire career,” said Ginda, his mouth widening into a warm smile and laugh wrinkles forming around his eyes as he recalled the moment. “I kicked the ball from 16 meters, and it flew under the center of the crossbar, directly into the goal.”

But it wasn’t the final score that mattered, Ginda said. It was what happened next.

“The most important thing that day was people’s questions when they saw what I believe,” he said. “It was great to see all those people there asking: ‘Who is this Darek that we have to wait for him to show up so he can then pass the ball to this guy and score a goal himself? What is the Sabbath? Why does he believe in it?’”

The 400 fans in the stadium had seen the soccer players anxiously looking at their watches during halftime, Ginda said. Some teammates had even wondered whether he would come.

“It was a big evangelistic event for those who watched me play and for my team members,” Ginda said. “That was the most important thing that day.”

Two years passed. Soccer scouts from top-tier team Zagłebie Lubin approached Ginda, then 23, after a match with the opportunity of a lifetime. They wanted him to try out for the premier league. Ginda said he decided to try out “simply to find out my value as a player.” Of nine players invited to the tryouts, only he and one other received an offer.

“Right after the tryouts, they took me to a table and gave me a pen to sign the contract,” Ginda said.

The base contract was worth $20,000 a month, plus at least another $16,000 in bonuses for goals and won games. The sum, significant by any standard, was especially impressive in 1993 when newly democratic Poland was struggling amid economic upheaval.

“It was a good amount of money,” Ginda said.

Zagłebie Lubin’s star player, Radoslaw Kaluzny, took a liking to Ginda and urged him to sign.

“Darek, you really need to sign this contract because I really want to play with you,” Kaluzny told him. “You are such a good person. Come on, sign the contract and we will go for a team camp in Croatia ahead of the next season.”

“I picked up the pen, but then I looked at the contract, and I didn’t sign it,” he said.

Startled, the team managers asked what was wrong.

Ginda replied: “I am a Seventh-day Adventist, and I don’t work on Sabbath. When there are matches on Sabbath, I won’t be able to play. I am trying to obey God’s Ten Commandments.”

“I decided not to sign because I knew something was more important than money and a career as a soccer player,” Ginda said. “Maybe all the matches would be on Sabbath, or maybe I would be injured on the field and couldn’t play anymore. There were too many questions and not enough answers. For me, it was best to be faithful to God.”

He returned to the Chojnowianka team. His salary was small in the fourth league, so he also worked in a dirty factory, making hydraulic pumps. Then in 1998 a prominent Polish sports journalist asked to interview him. The resulting article about how he had turned down the lucrative soccer contract five years earlier was published in one of the country’s biggest newspapers. The report caused a large splash. Fifteen other newspapers and several television channels picked up the story, interviewing Ginda in his home, at his factory workplace, and in his church.

“I had no idea what God had planned for me,” Ginda said. “This was an opportunity to talk about the Seventh-day Adventist Church, our beliefs, and the fact that my relationship with God is the most important thing for me.”

It was at that point that Ginda realized that he had become a soccer evangelist.

“I think God’s plan for me was not that I would be successful as a soccer player but to give those interviews so other people would know about God,” he said.

The news reports and television programs about Ginda remain online, and he receives letters from strangers almost daily.

“Someone is contacting me by mail or e-mail all the time to ask about God and why I didn’t do this or that,” Ginda said. “It’s a great opportunity for me to tell my story. So my story has never ended, even though it happened more than 10 years ago. It remains relevant because it concerns the same issues that people have today.”

Some of those who had earlier had called Ginda foolish changed their minds once the media started reporting his story.

“When all those articles were published, they began to think that there was something to this,” he said. “Even those who are not in the church write to me, ‘You did a good thing because you did not say yes to the money and instead focused on the things that you believe in.’”

Ginda’s current team, Skora Jadwisin, never plays on Sabbath, and the players are happy with that arrangement.

“My players say they want to follow the coach’s lead,” Ginda said. “They don’t even want to play on Saturday. They know I worship on Sabbath, and they are fine with Sunday games.”

He is not aware of anyone who has been baptized because of his influence. But his team members have regularly asked him about God for years. Several have attended church with him.

“You never know who will be invited by the Holy Spirit to be baptized,” Ginda said. 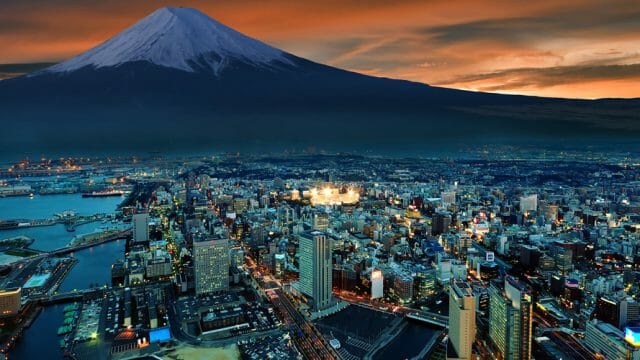 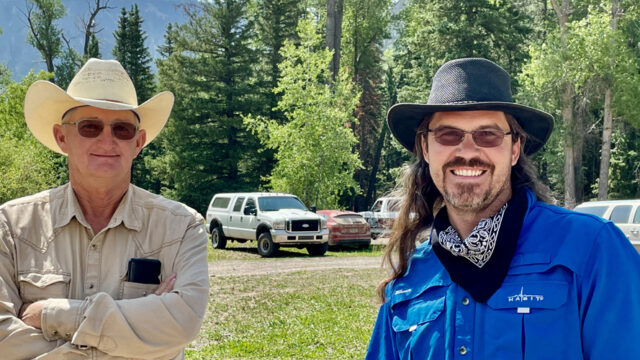 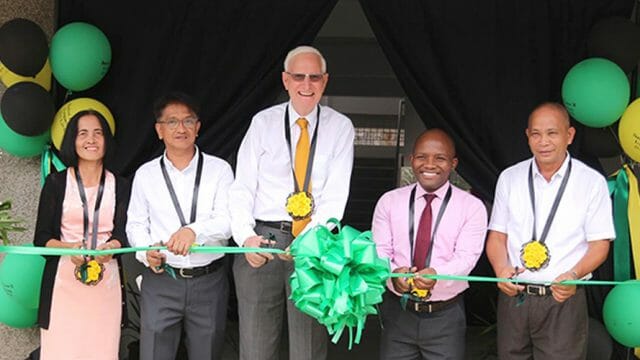 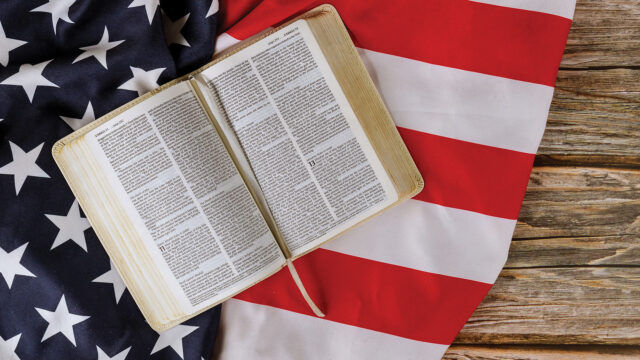 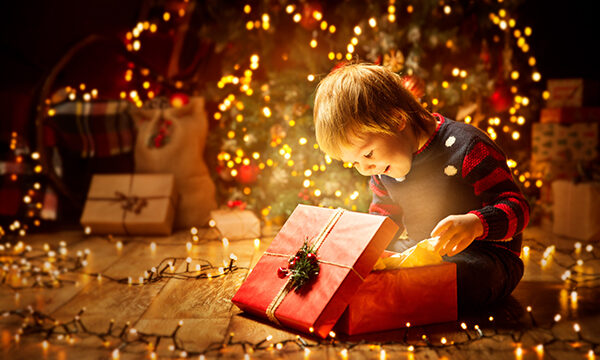